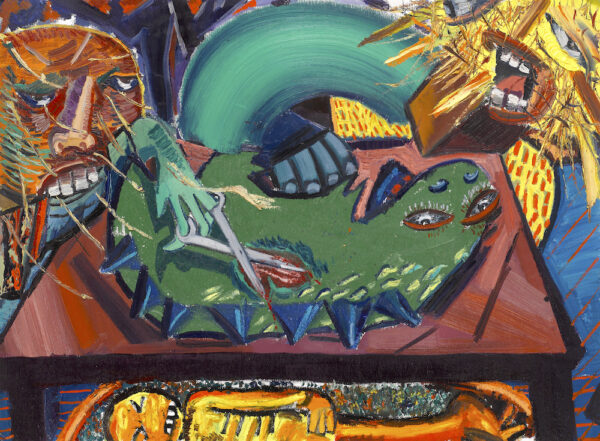 Tincuta Marin (b. 1995)
Tincuta Marin not only paints her dreams, she lives in them. The worlds she creates are fantastical but believable. There is a sequence to her narratives, a particular kind of logic similar to that which the subconscious evolves in order to escape reality and address concerns – even to create a buffer zone between the self and the outside world. Marin’s painterly language with its cast of characters such as the Omul de Piatra (Stone Golem) and Bigfoot is reminiscent of artists such as Philip Guston. Like Guston, her protagonists are often depicted in profile with only one eye on show. It could be a reference to the interior world of the mind’s eye, a physical manifestation of the link between the visual and the imagined. The sensuality of Marin’s paintings, twinned with a fluid comic-book style and canvases filled with demotic shapes charts the journey of the unconscious mind. Marin has always used painting as a means of escape and has evolved a world she describes as ‘full of monsters and funny creatures’. She sees this universe as a manifestation of the daily fight between good versus evil and a platform for re-enacting the general struggles of everyday life. By creating her own particular style of expression and making Brutalist forms enact her stories, Marin can reinterpret the reality of life by transposing it into another world – one that is full of magic and beautiful in a different way. The forms may be clumsy, ugly even according to our perceived notions of beauty and deformity – but the grotesque shapes have their own plain, crude beauty, stripped of artifice and extraneous detail, thus enabling the viewer to better see what is being played out. The artist is adept at creating dream-like scenarios with very particular atmospheres. Sometimes these hover at the boundaries of absurdity, even banality, but more often there is a pathos riven through the work which manifests itself in a similar vein to Max Ernst’s strange visions.