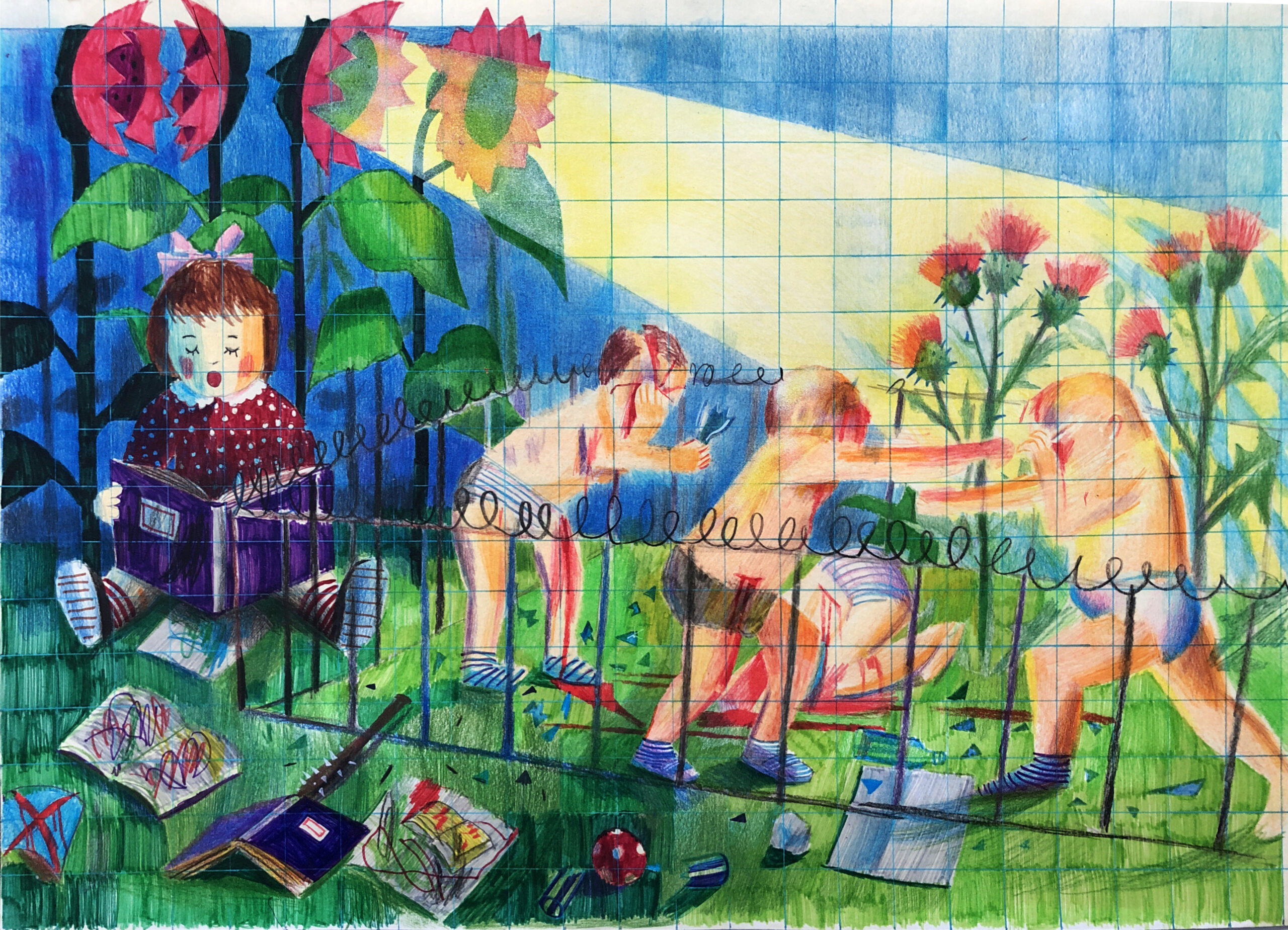 The return of the squared paper

Pista Horror compares the process of creating his new series entitled Kindergarten to ‘digging himself down the mine’ of his own subconscious, channelling new ideas, images and intuitive associations to the surface.

This series of drawings mark a sharp departure from Horror’s previous works of paintings on tiles. Working with tiles was a labour-intensive, elaborate and highly technical process that demanded precision and pre-planning, which is starkly opposed to the much lighter and more flexible medium of paper. 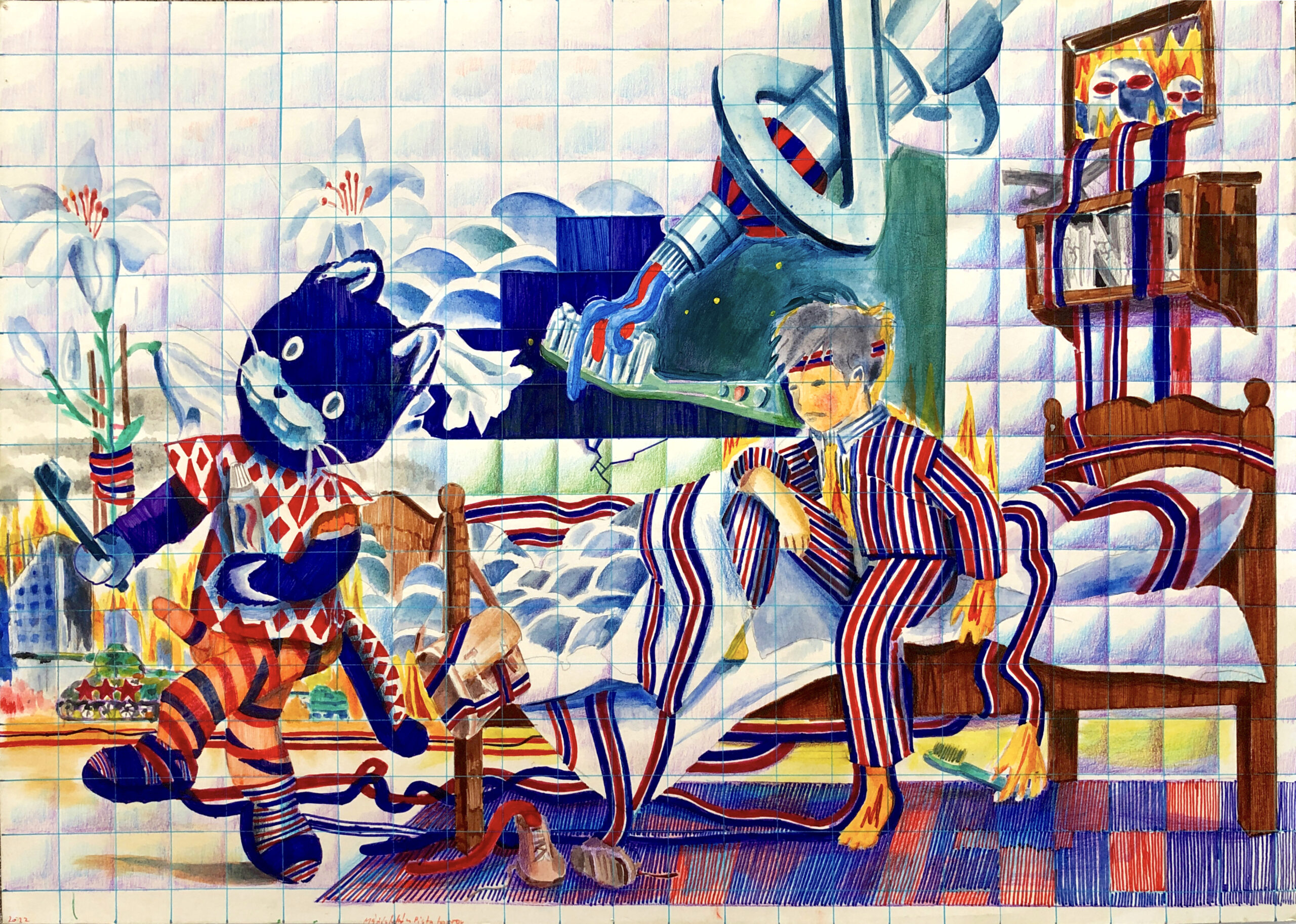 “Whenever I stick to one thing for too long, I feel the need to change and start something new”, Horror explains, as a way of challenging himself, his comfort zone and his creative inspiration. The artist describes the process of making these works as “almost automatic”, and how switching to drawings has allowed him to be more free and playful with his ideas; “Sometimes I start drawing one work, get an idea for a different thing and simply start a new one at the same time.” Figures, ideas, motifs and subconscious influences are able to flow onto the drawings through the lightness of the medium and his intuitive process.

Due to this semi-automatic approach, these new works synthesise many previous channels of themes and ideas in Horror’s oeuvre, such as his concern with challenging our conventional stratifications of reality and knowledge, escapism and nostalgia, the potential of overused, “cliche” images and of course – the sinister undertone of his signature black humour that reminds the viewer to not take any of it too seriously.

The nostalgic atmosphere permeating the series is largely informed by the medium itself. The squared paper Horror draws onto is reminiscent of primary school days. Horror first started making drawings on this kind of paper with felt-tip pen during his studies in Art School, between 2007 and 2011. The initial motivation was a kind of mischievous, tongue-in-cheek rebellion against learned schemas, authority, the hierarchy of knowledge and elitism in art.

In this return to the squared paper, the artist uses more varied techniques alongside felt-tip pens, including pencils, aquarell and acrylic airbrush to achieve a subtle effect but also vibrant colours and depth at the same time. These drawings mark a recurring interest in the subject of knowledge. The artist’s practice is concerned with the deconstruction and interrogation of social ideology and the normative way of seeing reality. Normative knowledge is rejected also in the recurring motif of the burning books throughout this series of drawings, such as in the piece Rebels. Compositions like Dualism / Black & White Mirror present the viewer with a fractured reality that contains within itself multiple portals – mirrors, windows, openings – to other visual planes, other fantastical dimensions. This partially represents a kind of escapist desire, but is also a crucial questioning of our established ways of experiencing the world around us. Horror’s previous diorama works expressed a similar desire to play with perspective and incubate multiple worlds and perspectives within an artwork.

Children and childhood have great symbolic importance within this narrative. In a child’s mind, imagination and perception of reality are much more flexible; in Horror words, “if a child sees a table it might not know its normative function, the function we have prescribed to it”, but it entails endless possibilities. As such, the children in his drawings undertake various adventures, explore realms and stubbornly resist conventional ways of experiencing the world. Mixing real and imaginary elements serves as a tool for Horror to break the fabric of conventional perception and challenge our entrenched hierarchies of time, space and reality. The other reappearing character throughout Horror’s oeuvre, Death or the Reaper, similarly reinforces a more complex view of time and reality as such. Death is never an insidious, malevolent presence; for Horror, it simply represents change, and the cyclical, transitory nature of existence. Though this series has less explicit socio-political undertones than some of Horror’s previous works, there are still some allusions to current affairs like in the drawing Mexican Embassy, showing a large picket fence with a toy soldier towering over it.

A dominant source of Horror’s visual vocabulary is rooted in his personal memories, imagination and imagery that had imprinted on his subconscious. Thus, his vocabulary is rich with national cultural iconography and references to Romanian and Hungarian identity, such as the works Hungarian Football Operette and Kiszlovodszki toothpaste, albeit always diluted with other global and fantastical elements. He is equally strongly influenced by his Catholic upbringing – there’s a dominant religious theme to many of his works such as the Saint Sebastian figure in the drawing of the same title – as well as being a child of the Eastern Bloc and living through the enormous societal and cultural shift towards globalisation that occurred after 1989. In his own words, “watching a kid somewhere on an American beach on television while you’re sitting at home in a Hungarian village” was world-changing in terms of opening up one’s mind to multiple, different realities.

Such processes of radical globalisation and their effects on visual culture and collective consciousness, which have since rapidly advanced, have consistently shaped Horror’s eclectic encyclopaedia of images. Kindergarten presents a manifold reality within which characters and symbols are jumbled up across time, space and our collective cultural consciousness.